Posted on May 21, 2016 by danielhoracioeugenio

Horacio Lucas and I in his front garden in Marian Acosta, Province of Buenos Aires, Argentina

While searching for photographs of relatives to insert in the family tree, I’ve found a couple of pictures of my mother’s father, my grandfather, Horacio Lucas Gómez del Olmo.

I have in my posession, thanks to my father’s photography hobby and way of bringing the bread and butter home, hundreds of pictures, actually they are black & white negatives, that I have patiently scanned (well, some of them), but there are only a handful of my grandfather, Horacio. He was born in Santander, España, on the 22nd of July 1898 and emigrated to Argentina in 1912 (arriving to the Port of Buenos Aires on the 17th August 1912). Unknowingly to him and his family at the time, they avoided two wars in one decition. His father emigrated first with the two eldest sons. Sometime later, his wife and the rest of the children (including Horacio), followed him.  To start with they settle in “Trenque Launquen” but later on he moved to Buenos Aires, the Capital of Argentina and became a “Motorman” for the “Sarmiento” train line. He was the first motorman to drive an electric train in the line. At that time the train line was a British company. Later 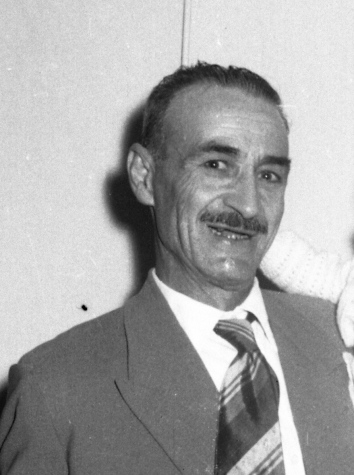 on it was nationalised but the Argentinian government (Juan Domingo
Perón). He died in Buenos Aires on the 5th of December 1971.

If you can read Spanish, you will be able to read one of my Short Stories: “Una idea Extraña”